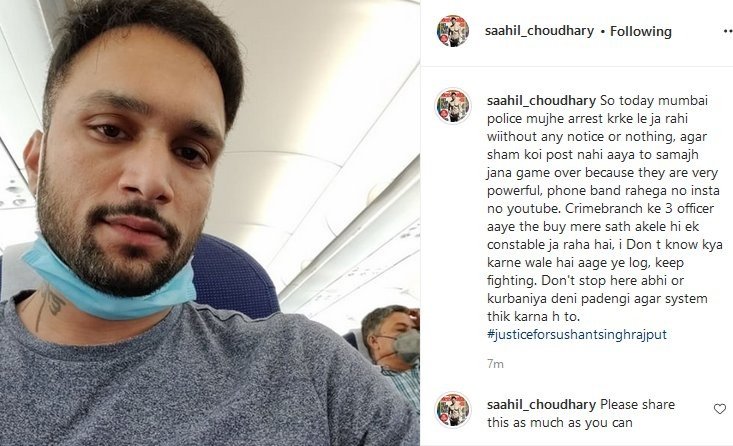 Model Saahil Choudhary arrested by Mumbai Police on 28th September for raising questions on the current government of Maharashtra over the Sushant Murder Case.

In his Instagram, he shared a story. He uploaded a photo in his story and wrote “I am in flight going to Mumbai with Mumbai Police. If I didn’t post anything till today’s evening on my social media then yes I will be definitely in trouble.”

Three Crime branch officers came to his Faridabad home. Also, Mumbai Police came to his home without any arrest warrant and took him to Mumbai by flight. He was with a constable in flight. His latest post where he mentioned this incident, deleted from Instagram. But, his Insta story is still available. He didn’t come live on any social media platform from the last 12 hours. He already said if he didn’t do live then he is definitely in trouble for speaking against Government and asking Justice for Sushant. So, as Saahil Choudhary arrested by Mumbai Police, fans started a movement against Mumbai Police.

Fans of Sushant and Saahil started trending #saahilchoudharyarrested on Twitter

Who is Saahil Choudhary ?

Saahil Choudhary was an Indian Model. But, he stopped his career in Modelling when he had to deal with the dirty side of modeling and Bollywood. Now, he is the owner of Gym and Cafe in Faridabad. After Sushant’s death, he started doing live in his youtube channel where he mentioned the dirty sides of Bollywood. Also, seeing the delay by Mumbai Police in the Sushant case, he highly criticized Maharashtra Government and Mumbai Police.

Saahil also said in his video that, Corona is a worldwide scam and We are all paying for it. His video got deleted from Youtube to speak about Corona Scam which he personally experienced. He said that in the future, ministers of Shivsena who were involved in the Sushant case will get clean chit as Shivsena could alliance with BJP. He criticized both Shivsena and BJP.