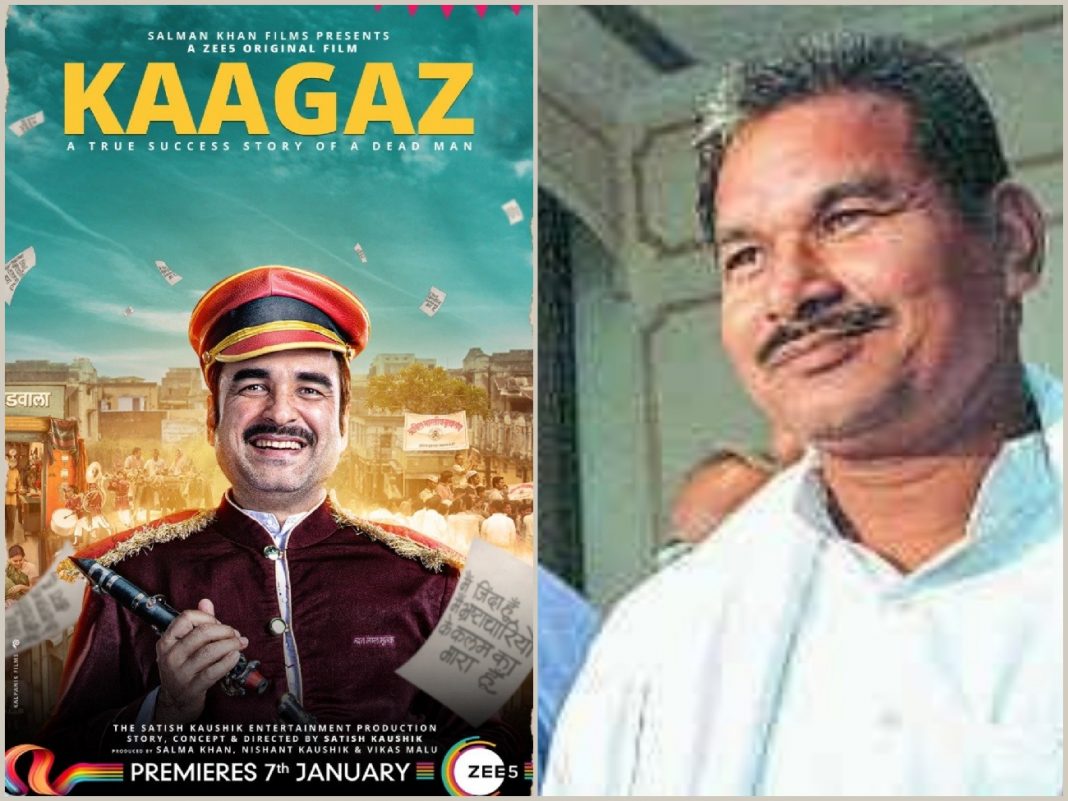 Kaagaz Film starring Pankaj Tripathi is based on the biography of Farmer ‘ Lal Bihari’. Lal Bihari was declared dead between 1975 and 1994 even if he was alive. Pankaj Tripathi performing the lead role with the name ‘ Bharat Lal Mritak ‘.

The Lal Bihari is a Farmer from Amilo, Azamgarh district of Uttarpradesh. He wanted to start his new handloom business. So, he needed a loan for the business. But, he was shocked when his village lekhpal told him that he is not able to take a loan as he is dead. Lal Bihari was confirmed dead on government documents (Kaagaz) and his land devolved to his cousin. From this point, his journey began to prove himself as Alive.

Lal Bihari took several desperate steps to prove himself alive. Here are the steps taken by him :Lal

Lal Bihari Kidnapped his cousin Baburam as his family bribed authorities to declare him dead on documents. He wanted that Baburam ‘s family should file complaint against him so that he would be noticed as a alive by police authorities. But, Baburam ‘s family didn’t file complaint against Lal Bihari of kidnapping. Also, Lal Bihari was not any professional kidnapper, so he returned Baburam to his family as was clueless how to perform kidnapping.

2. Bribed police to register false case against him

He wanted that police should file an FIR or case against him. So that it would help him to get notice. Lal Bihari bribed police to file case of riots against him. But when policemen knew about his motives, he returned his bride to Lal Bihari.

As Lal Bihari was dead in eyes of government authorities. So, he decided to apply for widow pension for his wife. He himself went to apply Widow pension so that authorities will reject him saying he is Alive. But, pension was rejected due to some other technical reason. This idea also went fail for him.

Some opposition raised questions on the misfortune of Lal Bihari in the state assembly during question hour. So, he decided to set a protest in front of the State Assembly. Later, he came to know that the protest inside the assembly will grab a lot more attention. So, he arranged for a visitor’s pass and went into a live assembly session. He screamed ‘ Mujhe Zinda Karo ‘ inside the state assembly until he was thrown out by securities.

Even after doing all, his issue was unnoticed. So, he decided to contest Lok Sabha elections. He had courage to sell off his property and file nomination against Rajiv Gandhi from Amethi and V. P. Singh. Due to this, he came into limelight of media. Some media groups starts writing about his in their newspaper.

Lal Bihari was not the only one. Already, a lot of other cases happened where a person declares dead and his land grabbed illegally. He searched and gathered people like him and founded Mritak Sangh. Lal Bihari added the word ‘ Mritak ‘ at the end of his name. So the word could simply be referred to as the story behind his name. He introduced himself as ‘ Lal Bihari Mritak ‘ The target of Mritak Sangh was to deliver justice to the ‘alive’ dead people. His Mritak Sangh got headlines for a day in the newspaper.

All his efforts paid off in 1994 as Tehsildar ordered an inquiry for this issue. The Sangh followed by Lal Bihari has more than 20,000 members. He declared it alive after 18 years of this fight against the system.

Bihari was awarded the Ig Nobel Peace Award in 2003.

About film ‘Kaagaz’ which is based on Lal Bihari

The ‘ Kaagaz’ film was on the list of actor and producer ‘ Satish Kaushik ‘, who wanted to make movie based on the story of Lal Bihari in 2012. But due to some budget issue, it wouldn’t possible that time. In 2019, he discussed script of the movie with Salman Khan. Salman liked the script and gave green signal to release it under the banner of Salman Khan Production.

Bharat Lal Mritak the character from the movie is portraying the biography and story of Lal Bihari Mritak. Kaagaz film is streaming on Zee5 from 7th January 2021. It also released in selected theatres of Uttarpradesh.