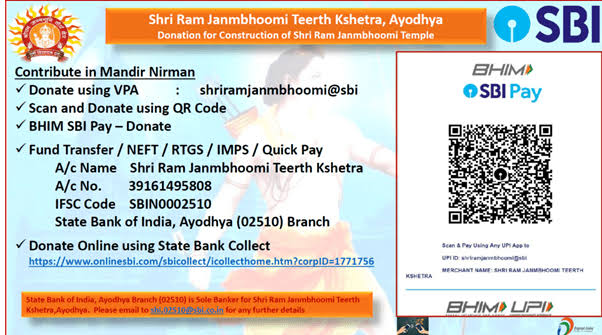 What is UPI ID and Payments ?

UPI stands for Unified Payments Interface. UPI ID is an alternative method invented by India to do online financial transactions. In other methods, users need to fill details like bank account number, IFSC code, bank branch name and address while transferring money from one account to another. But, when the users carry out a transaction with UPI ID, they do not need to fill any of those details to send or receive financial amount. Users just need to register once with their banking details in respective UPI App. And, they are free to transfer money online anytime and anywhere with connection if Internet. UPI also s as Virtual Payment Address (VPA).

Many Fraudsters created multiple Fraud UPI ID’s under the name of Shri Ram Mandir Janmbhoomi Teerth Kshetra. They are simply create to trap people with help of their religious sentiments. These UPI ID are looting people, and it is not predictable that how many people have donated through this UPI ID’s.

Before making donation for Ram Madir through UPI, kindly check the registered names of UPI IDs. You must also be careful about the QR codes. Fraudsters might photoshopped the image, and replace the authentic QR code with their own QR code to trap the devotees.

How are they looting the devotees?

This cyber Fraudsters are making viral Whatsapp and facebook messages. This messages are urging people to donate for Ram Mandir online on their UPI ID. Also, Fraudsters can edit the original QR Code with their one. So,always check right QR code too. Beware on how and whom are you donating the money. So, Cross Check all the details before making any payment to donate online for Ram Mandir

Taylor Mosher obituary- Taylor Mosher was the one who always had a smile on his face. She was quite popular and pretty too. She...
Read more