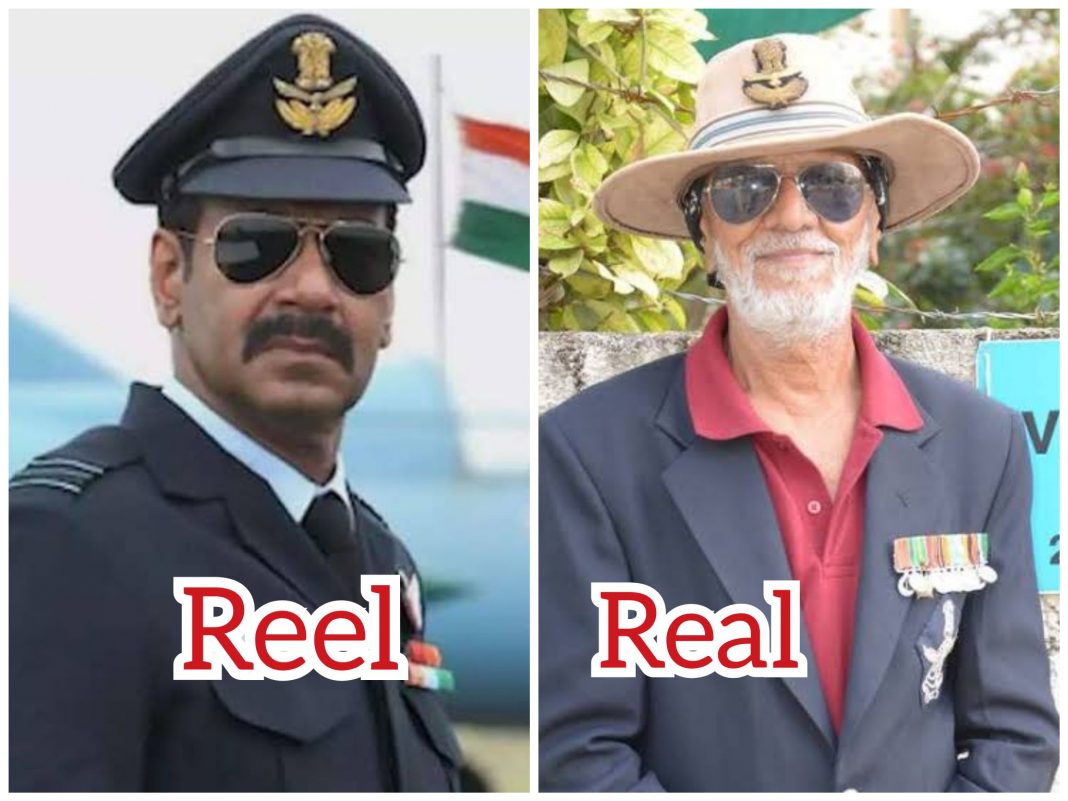 Vijay Karnik real life story and photos: The name of retired Indian Air Force officer Vijay Karnik is trending due to the upcoming movie Bhuj The Pride Of India whose character is portrayed by Ajay Devgan. The movie is based on Indo – Pak War of 1971 and will release on Disney + Hotstar on August 13.

Who is Bhuj The Pride of India famed Vijay Karnik

Vijay Karnik was born in Marathi family on 06 November, 1939 in the Nagpur, Maharashtra. His full name was Vijaykumar Srinivas Karnik. Vijay Karnik completed his schooling from Nagpur and completed graduation in Bachelor of Science from Nagpur University in Wardha.

Vijay Karnik was assigned into the Indian Air Force on 26 May 1962. He served as a Squadron Leader in Bhuj during the Indo-Pakistani War of 1971.

Is Vijay Karnik alive or dead ?

The ex wing commander Vijay Karnik is of age 82 and is still alive. Ajay Devgan met with Vijay Karnik many times to discuss about film and his character.

What exactly happened at Bhuj Airport in 1971?

During the Indo – Pak War of 1971, Pakistan attacked with eight squadrons of Sabre jets and dropped more than 14 Napalm bombs on the Bhuj on 8th December. This destroyed the Indian Air Force Airstrips. It was the need of an hour to get the airstrip repaired. So that, airbase get operational for the ongoing war between India and Pakistan. The task seemed to be impossible due to the less time and lack of workers for the restoration of the runway.

Vijay Kumar Karnik ( squadron leader of that time ) took the charge of Bhuj Airport. He decided to take the help of the locals of Bhuj to rebuild the airstrip. He convinced 300 local women of village Madhapur, Bhuj to help Indian Army. This challenge to rebuild the airstrip became even more challenging due to the bombing by opponents. Still, Vijay Karnik along with two senior officers, 50 IAF and 60 Defence Corps tried to make the airstrip operational. The airstrip got restored within 72 hours with the combined efforts of Vijay Karnik and 300 local women.

When this War successfully ended, this whole operation of rebuilding the airstrip was named as ‘ Pearl Harbour Moment of India ‘. After this War, the Prime Minister of that time Indira Gandhi appreciated the efforts of all 300 women. So, they were awarded a group award of Rs 50,000 by the Indian Government.

Vijay married Usha Karnik on 20th Feb 1965. Her wife was the proprietor at Shehnaz Hussain Franchise.

His son name is Paresh Karnik who works at Times Group

Ranchordas Pagi Birari was born in Banaskantha District Gujrat. He was very familiar with the local areas of Gujrat especially the part of Kutch. So, he was recruited by Indian Army. He helped army for tracing the location of enemies and save 1000’s of soldiers from opponent’s attack.

The character of Ranchordas Pagi Birari is portrayed by Sanjay Dutt in the film Bhuj The Pride of India.

About movie Bhuj The Pride of India

The trailer of the movie came out on 12th July 2021. The audience really loved this movie and expressed their excitement for the movie release. But, many people disappointed due to non thetrical release of film. The visuals which film captured really make it worth to watch it on big cinema screen.

The trailer start with an airstrike on the Bhuj airport. As India figures out easy methods to cease the Pakistan military, we see glimpses of how the characters of Ajay, Sanjay as ranchordas birari pagi, Sonakshi, Nora and Sharad are stuffed with the fireplace of patriotism. There are additionally loads of motion sequences, from missile launches to assaults on warships.

Bhuj: The Satisfaction of India is about for a direct-to-digital launch on Disney+ Hotstar on August 13, simply two days earlier than Independence Day. Ajay directed an motion sequence in Bhuj: The Satisfaction of India on account of stunt coordinator Peter Hein’s unavailability final March. “It’s true that Ajay designed the motion sequence for the film. The sequences come at a vital juncture within the narrative. Within the first set-piece, Ajay is seen trying hand-to-hand fight as he fights the spies despatched by the Pakistani military. The opposite phase, an out of doors shoot, has Sanjay Dutt and Sharad Kelkar tackle the baddies,” Mid-Day quoted the movie’s spokesperson as saying.