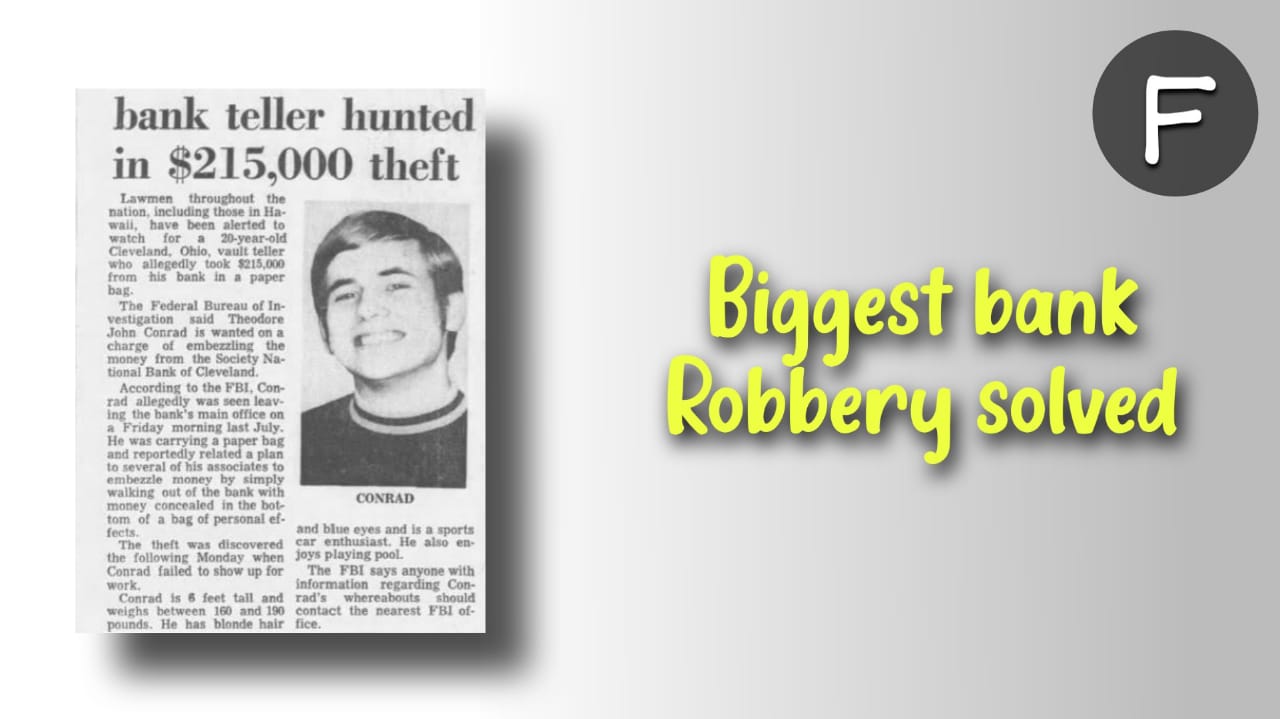 The article is going to inform you about the most unique and adventurous heist which is recorded in the history which is finally solved after 52 years. Here latest news with the Theodore John Conrad’s biggest bank robbery which has come to an conclusion after 52 years. The Ohio case is finally solved as it took 52 years for the Investigators of the matter in Massachusetts.

On July 11, 1969, a 20-years-old man did bank heist and stole $250,000 from a bank in Cleveland. The man is seen walking away with a paper bag having the actual cash in it. The bank employees took two days to realize the heist. But, within that time, the bank robber was far from making the robbery a mystery that took more than five decades to solve.

Ted Conrad happened to be one of the most wanted men after committing the crime in 1969 while an employee in the Society National Bank in Cleveland. It is more than half a century since the Federal Investigators finally put an end to the cold case with great victory and tracked down the man in the suburbs of Boston.

“This week, we identified Thomas Randle as Theodore J. Conrad. He led an unassuming life in the suburbs of Boston,” announced Peter J.Elliott, a U.S. Marshal for Northern Ohio whose dad was on the Conrad Case in the early days.

Elliot was searching for Con right from the day he inherited the case, and he is now thinking about his father that the mystery has been solved.

“My father never stopped searching for Conrad and always wanted closure up until he died in 2020,” Elliott said in a statement. “I hope my father is resting a little easier today knowing his investigation and his United States Marshals Service brought closure to this decades-long mystery. Everything in real life doesn’t always end like in the movies.”

The federal investigators said they had recognized the person some days before and realized that Randle and Conrad were the same people.

The U.S. Marshals most wanted Conrad for the most significant bank robbery case in Cleveland’s history. As per the investigators, Conrad stole a whopping amount of 1.7 million dollars from the bank where he was working.

It is allegedly said that Conrad was obsessed with the 1968 movie “The Thomas Crown Affair,” which shows committing perfect crime at a Boston Bank, which must have inspired Conard to commit the crime.

As he disappeared with the money, his story sparkled with curiosity becoming a popular one and was also featured on “America’s Most Wanted” and “Unsolved Mysteries.”

“You couldn’t do what Ted Conrad did in 1969 today. There’s no way you could get away with it. First of all, you can’t create a name out of whole cloth anymore.”

The officers traveled all across the country looking for him but always returned empty-handed.

It came last week as the U.S. Marshals finally identified Conrad as Thomas Rendell of Lynnfield, Massachusetts. After the robbery happened, the robber moved to the Bay State in 1970 to live their everyday life and avoided staying in touch until he died of lung cancer at the age of 71 in May 2021.- said to the authorities.

At Lynnfield, many of the suspect’s neighbors claimed that they knew him for years, never knew that he was America’s most wanted fugitives.

The Investigators from Cleveland say that they were able to find him through signed documents by Conrad in the 60s to that of the recent court paperwork from the 2014 bankruptcy case and concluded that both the man is the same.

The amount that he looked at that year was 1.7 million dollars.

The heist wasn’t confirmed until Conrad didn’t show up to work on Monday. And soon, the employees realized that the vault was empty and all the money was gone. But, by the time, Conrd was two days ahead of the Investigators. And this time-lapse happened to be five decades for the case to solve.

Let us see what U.S. Marshall Peter J. Elliot has to say about the case closure?

“This is a case I know all too well. My father, John K. Elliott, was a dedicated career Deputy United States Marshal in Cleveland from 1969 until his retirement in 1990,” he said. “My father took an interest in this case early because Conrad lived and worked near us in the late 1960s. My father never stopped searching for Conrad and always wanted closure up until he died in 2020 …

“I hope my father is resting a little easier today knowing his investigation and his United States Marshals Service brought closure to this decades-long mystery. Everything in real life doesn’t always end like in the movies.”

Summing up our article on Theodore John Conrad, we have covered all the details regarding Theodore John Conrad ‘s biggest bank robbery solved after 52 years of Bank Heist. I hope you all like our article and will appreciate our hard work to put the information on the mark for you. Ted Conrad happened to be one of the most wanted men after committing the crime in 1969 while an employee in the Society National Bank in Cleveland.