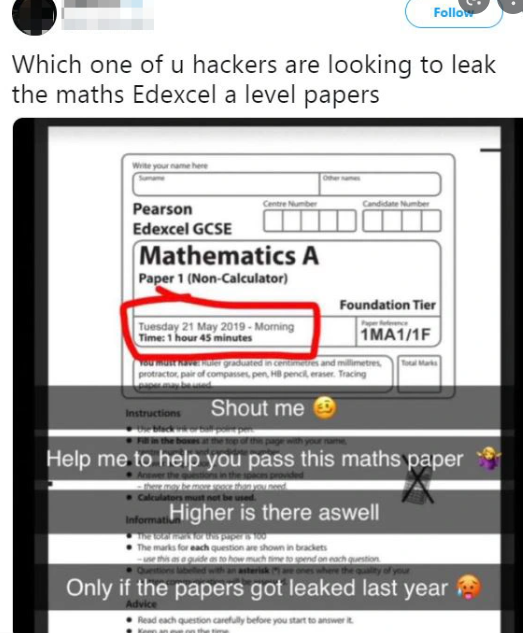 The GCSE 2022 papers leaked by some group of people and now respective department investigating this matter.

When were GCSE 2022 Papers Leaked online?

The Edexcel paper 1 was leaked last Friday on the morning of the exam around 6 am on Twitter. After the leak, the paper was removed from Twitter. The official Twitter handle of Edexcel informed that they are aware of the situation and are investigating this matter.

What will happen after the leak of GSCE 2022?

Edexcel after investigation may find that it was only a small group of people that are involved, those groups of people will have their papers canceled. They will get 0 for the exam. Also, for any other exam they sit on Edexcel Board, Edexcel will inform all other boards to take similar actions. But, if the leak is bigger than that and more widespread then what is likely to happen is what happened before.

In previous years, whenever leaks happened, then what Edexcel did is, they give full marks to that particular question that has been leaked to each student. But, it raises the grades of students due to full marks for questions. So, the board cancels out the leaked question so that it shouldn;t be unfair.

This is still not known.

Tools that are helpful for the students in their educational field

Tools that are helpful for the students in their educational field

If you are a student looking for digital help, you have landed in the right place. This article will tell you all about the...
Read more

Check ‘Nasa Picture Of The Day You Were Born’

The Nasa Hubble Space Telescope runs 24 hours a day, seven days a week, and during that period, scientists have gathered an enormous amount...
Read more

Blackboard is hugely utilized in the current era when teachers avail different quizzes and share some electronic content with their students. Due to this...
Read more