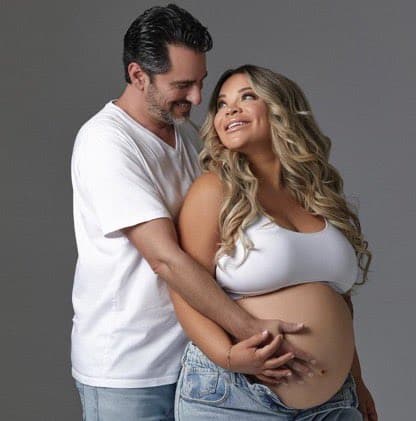 There’s a lot of speculation over what TRISHA Paytas will name her new child now that she’s in labor.

She tweeted on Wednesday evening that she was “1 cm dilated” – meaning that she had gone into labor – and the couple is expecting their first child any day now.

After Trisha confirmed the baby’s gender in April, fans have speculated about the baby’s name nonstop. Some now speculate that the baby will be named Elizabeth in memory of Queen Elizabeth, who tragically passed away today on the same day as the expected birth.

Earlier this month, Trisha said they had already chosen the baby’s name, but wanted to wait until she arrived to reveal it.

She twitted – “I’m not superstitious, but I would like to announce her name when she arrives.”

Twitter is currently buzzing with the theory that Trisha’s baby is the reincarnation Queen Elizabeth II.

The 96-year-old Queen Elizabeth II passed away on Sept. 8, 2022. Similarly, Trisha announced on Sept. 8, 2022, that their daughter was in the early stages of labor. People began making jokes about Queen Elizabeth’s soul returning through Trisha’s daughter’s body pretty much immediately after those connections were made.

As of now,  Trisha has yet to reveal the name of her newborn, some users are guessing she named the child Elizabeth – though, this is highly unlikely considering the YouTuber raises her child as non-binary.

Although we can’t verify whether the supernatural conspiracy is true, Twitter is still making memes about it. In a tweet with more than 300,000 likes, a jokester teased, “Queen Elizabeth is about to reincarnate as Trisha Paytas’s baby. We’re laughing.”

Trisha shared some of her favorite baby name

The baby’s name has been picked out. It’s done, and it’s solidified. Honestly, you know me, I’d love to utter it. I’d love to say ‘the baby’s name is this.’ But, like, I’m not superstitious, but I think announcing her name when she’s here just seems fitting,” Trish said in their video.

The couple clarified that it is possible the mystery chosen name might not be appropriate for their daughter when she is born. They don’t anticipate that happening. Trish said, “I really believe this is the name of our baby.”

Trish continued, “In the end, we want to see her, and to have her energy here.”